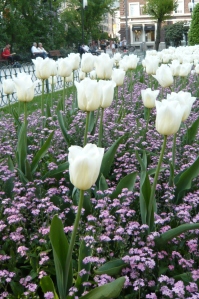 The end of yet another year.  A time for saying Hej Hej to the old and Hej to the new, for kicking bad habits and embracing the pristine promise that a brand spankin’ new year brings with it.  A chance to wear questionable head-gear and glasses with 2013 emblazoned in glitter and sequins.  If you so choose.  And a chance to say good-bye, one last time, to all the things that have passed out of our lives this year.

Sometimes we look back with a sad sort of fondness (farewell, Donna Summer, may you be singing under that great disco ball in the sky).  Sometimes sweet memories of childhood or adolescence are evoked (Good-bye Juan Epstein AND Arnold Horseshack, Mr. Jefferson, and Mrs. Laningham).  Other times it’s a relief to say good riddence to things and events (yes, I mean you former Rep. Todd Aiken).  In an admittedly morbid kind of way, I love these end of year wrap-ups.  I love the little bite-size chunks of nostalgia that allow us one last moment of remembrance and good-bye.  (Good-bye Maruice Sendak and Ray Bradbury, Neil Armstrong and Sally Ride.  Good-bye to MCA, here’s to hoping you  found sleep in Brooklyn at last.)

And so, in the spirit of endings, and just in case the Mayans were right, here is my very own homage to things that passed out of my life in 2012:

The year before I turned 40, I went into a diet/exercise frenzy in order to look my best while swilling champagne and lamenting the fact that I was officially middle-age.  And for one brief minute, at my thinnest, and after a bout with gastroenteritis, I fit into a pair of size 4 jeans.  They were itty bitty.  I hung onto you for a while itty-bitty jeans, I even brought you with me to another country.  But 2012 was the year my closet, and my insane quest to fit back into them, said good-bye.

I never thought I would miss the days of “time outs” or when the consequence of no cookie after dinner was enough to get one’s 4 year old’s butt into gear.  But alas, there is no more getting away with blanket threats of random consequence for my eldest child.  He is old enough now to question not only why he shouldn’t do something, but calculates the reward v. punishment ratio right there in front of us before sometimes deciding to just go ahead and do it anyway.  Farewell, blind obedience.  I feel like we hardly knew ye.

The desire for a third child

This one’s been hanging on for a few years, clinging to some sort of half-life, lying in a semi-comatose state but rising to consciousness every now and then.  But this year it finally gave up the ghost.  For a long time I would have been secretly pleased if a little bundle of oops came along 9 months after a night of wine and parental approved passion.  Now, frankly, the idea scares the shit out of me.  I live in fear of the ‘change-of-life-baby’.  When I was lobbying hard for a third,  my husband would look at me with those wounded doe eyes and  say, “Every day we are getting one day closer to getting our lives back the way they used to be.  Why would you want to screw that up?  Why???”  Finally, I see his point.

Not only have I found a new way to spend my husband’s money, not only do I have a house full or scarves, but my new knitting hobby has also at long last freed me of my internet message board addiction.  For years I would read these snarky and malicious message boards and silently fume at the callousness of people.  Yet every night, sitting with a glass of wine and a bowl of salty, after-dinner snack, I would go back for more.  Farewell internet trolls.  I may need a twisty straw to get to my wine while my hands are busy with my knitting needles, but it’s a small price to pay to be free of anonymous vitriol.

Long gone are the days of 11 am wake-ups followed by a mimosa driven brunch followed by a nap.  But recently, my husband and I have been able to make sure the kids have food and are not heavily armed, make a pot of coffee, and get back into bed for an hour or two.  Bliss!  But just when you think you may be getting your Saturdays back….the sports stuff kicks in.  And now there’s lacrosse on Saturdays and football on Sundays and well, it’s only going to get worse really isn’t it?

When we first found out we were moving to Denmark, everyone mentioned Vitamin D.  I should take it, my husband should take it, the kids should take it.  We should bathe in it if we could. I kind of poo-poohed it.  How different could it be from living in New York?  It’s not that much further north, is it?  I was wrong.  After a year here, I think my stockpile of sunlight from Cyprus has finally been depleted. I am tired.  I am listless.  I am off to the apoteket for supplements.

So there you go.  My very own In Memorium.  Overall, it’s a much better list than 2011’s would have been.   Last year I was saying goodbye to a lot of very dear friends, the place I called home for 3.5 years, and a front tooth.