When my husband and I met, we happily subsisted on a diet of  Hostess fruit pies, cigarettes, and young love.  By the time we were married, we were earning bit more money and enjoying a little more disposable income (have I told you about my beloved Prada slip ons?). But with more income came more choices.  We had what we called ‘The Wheel’.  Flush with (relative) youth and two incomes, we vacillated between buying a tiny, overpriced apartment in a pre-gentrified neighborhood of Brooklyn, having a baby, or chucking it all in and traveling for a year.  Every three months or so we would change our minds and the arrow would swing toward a different chunk of pie.  Ever the nervous-Nelly about finances, I was usually the one pushing for sensible savings and down-payments.  Ever the dreamer, my husband fantasized about living out of backpacks and seeing the parts of the world he hadn’t already seen.  And so we would go around and around, never getting anywhere.  Like a hamster spinning endlessly on its exercise wheel.

The point of this story, apart from the fact that I like it, is that we all face choices, we all make decisions.  Which way do you turn when 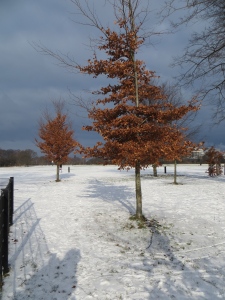 you reach a fork in the road:  do you take the safe, well-lit highway?  Or do you opt for the over-grown and dim path?  Often you choose blind, not knowing if your decision was the right one until much further down the line.  Perhaps that asphalt highway is full of pot-holes and traffic jams.  Perhaps the dark and weedy path evens out and meanders gently through a quiet wood.  But these are things we all face.  Psychology tests are based on this stuff.  Cutely worded posters with kittens taped in break rooms.  One of the most famous poems ever written.

It’s a rare individual who is able to stand at a crossroads in life and assuredly say “This way!” without some sort of hesitation, some sort of second guessing, a list of what ifs.  In my case, it is often a notebook filled with pros and cons and financial calculations that makes my husband tune me out as soon as I bring it out.  Many times we think we are in it alone, forced to make these choices as individuals.  But the truth is, the footsteps in front of us are clearly defined and deep.  We are alone in our thoughts, but at most points along the way, we are surrounded by others in the same situation.  Sometimes you choose to hitch a ride on another’s wind and sail smoothly upriver, saving yourself a few thousand miles.  Sometimes you climb aboard and promptly sink.  But chances are, even then there is someone sinking right next to you that is feeling much the same.

So where am I going with all this?  Well, I’ve been accused of mind-tapping.  Sneaking around in other people’s heads pick-axing my way through the mist looking for fodder for my blog.  No, not really.  That’s my writerly way of saying that my postings seem to resonate on some level, with a certain demographic.  Several times I’ve been told by someone that they had been thinking about the very same thing when I published an article.  Like I’m in their head.  It’s not witchcraft.  It’s not even word-craft so much, though I think that my love of language helps.  It’s because we are all in the same murky pool, fighting our way along.  Whether you believe in psycho-analytical archetypes or dismiss it as magic and mirrors or whether you fall somewhere in the middle, it is difficult to deny that at certain points in our life, we gyrate and gravitate toward those that are, to keep with the same metaphor, in the same boat.  So when I write about the Danes and their dislike of queuing or my maternal instincts being aroused as my children grow older and offer their hearts to the world, I am writing to an audience that are experiencing similar pangs and doubts.   Most parents have the same fears about whether or not we are doing an ok job, being a ‘good enough’ parent, or whether we are well and truly fucking up our children for life.  Most ex-pats worry and fret at some point if they have made the right decision, or one that will haunt them for a lifetime.  I am merely tapping into the collective unconscious, siphoning off some material here and there.

Parents often are amazed at how easily young girls become obsessed with princesses or boys with super heroes and Star Wars, even if they haven’t been exposed to it.  But I always think of this as part of the collective unconscious of childhood.  Obviously Jung was not speaking specifically about Spider-man or Dora the Explorer when created his psycho analytic archetypes, but heroes and heroines and leaders have always been a part of that unconscious, it’s only the costumes and super powers and weapons that  have changed with time.

As we grow, the costumes and powers and weapons change again.  The omniscience of the Mother (we call it mom-niscience in our house).  The power of the Father wrapped up in the statement “Wait until your father gets home!”.  We are all telling the same stories.  The longing of homesickness, the roller coaster emotions of parenting, even the frustrations of learning something new.  Our stories just have slightly different beginnings.  Or middles.  Or ends.

So don’t burn me for practicing the dark arts.  I am merely putting into words what many of us feel, a cobbler hobbling some sentences and phrases together.  If it makes sense, if it makes one feel less alone, I am just grateful the screws and nails I plucked that day have held together.