Today would have been my father’s 68 birthday.

Instead, it’s another day on the calendar.  There are no cards to send, no phone calls to make, no need to juggle the time difference to make sure no one is too sleepy or having dinner or rushing to the phone in the middle of the night.  Just another day.  Except it’s not.

68 is still young these days.  Still plenty young enough to enjoy his grandsons.  Still young enough to travel overseas to visit his daughter and her family, to go on European adventures, (Look Dad, there’s Big Ben!), to play lazy games of golf with my husband, to joke with my sister, to cheekily goose my mother when he thought no one was looking.  Or sometimes when he thought we were looking.

There are long stretches of time that go by without me thinking of my dad.  Whole blocks of calendar time.  There are times when it seems like forever ago since he was around, since I heard his laugh.  But there is not a day that goes by that I don’t wish he were still here.

On the blog post back burner, there are some notes jotted for an article about Fathers and Sons.  It never occurred to me until today to 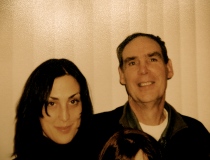 write about Fathers and Daughters.  My Dad was not a perfect father, just as I was not a perfect daughter.  He was a father of the 70s, one who never changed a diaper, or finger painted or thought twice about playing basketball on a Saturday morning, the only time our mother could have caught a break.  But he came home for dinner every night at 5 pm.  He came to 12 years of dance recitals, a bouquet of flowers in his arms.  When I longed for a doll-house, he sent away for grand blue-prints of  a Victorian up and down that would have been the envy of any who saw it.  If he’d ever finished it.  The day the woods burned was the day he taught me my lesson in guilt by association.  It wasn’t the sneaking cigarettes that infuriated him as much as the not standing up and walking away.  And though he teased me mercilessly over the years, never letting a family gathering go by without bringing up the ‘time I burned down the woods‘, it’s a lesson I am teaching my own children, that sometimes you need to stand up and walk away.  He stood up for me with my ridiculous teenage hair even though he hated it.  He burned up the telephone lines reading the riot act to a teacher who made my sister cry.   He rescued me on a dark and snowy night after I spun the tire off of my car trying to get it out of a snow bank.  He taught my sister how to drive a stick shift in the church parking lot.  He danced with me at my wedding.

He could also be a colossal pain in the ass.  His propensity for flogging the proverbial dead horse was maddening  (See:  burning down the woods above).  He hung on to an idea like a dog with a leather bit in its teeth and woe behold the one who tried to pry his jaws apart.  There was little giving in, little room for negotiation, little compromise.  But the rules were fair and balanced, he realized the value of making mistakes and never once did I doubt he had my back.  But God, how he loved to laugh, my Dad.  It’s astonishing to me that my husband still married me after meeting my father for the first time and being forced to listen to a scratchy, old recording called “The Farting Contest’, which my Dad tried to narrate through tears of laughter and knee-slapping guffaws.  I’m sure I turned 50 Shades of Red that day.  Nothing like bringing home a fella and having your father regale him with tales of flubber-busters and farting poles.

No, he was not a perfect father, but the memories that I carry with me are perfectly preserved.

So today, instead of mourning anniversaries and masses and candle lighting, I want to remember what we would have done if he had been around to blow out his 68 candles:

Some French onion soup, in those ridiculous 70s style tureens he bought.  A nice Beef Wellington followed by a trifle and an Armagnac chaser.  A bowl of vanilla ice cream.  Television on the couch.  Laughter.  Simplicity.

So tonight over dinner, I will raise my glass to you, Dad.