This week marks the eighth anniversary of my father’s death.  Bookended by my birth and his death, his chapter in my life as dramatis persona has closed.  What I am left with is passive.  Water-colored and muted memories.  But with death comes the ability to analyze every nuance of the person who has gone before you, with the unique benefit of having no one to refute or confirm.  You are left with your own theories to move on with, to live with.  My father remains to loom giant-like as he hovers in my memories, my psyche, and my writing.

But this post is not meant to be about my father.  Not the one who has gone, but the one he left behind.

My parents were married in fall of 1967.  I wish I could write they were married under a canopy of autumn color, wood smoke and

tart apple crispness in the air, but their wedding was a traditional affair; married under an arching apse in front of God, family, and friends.  My grandfather sobbed as he gave my mother away, passing her hand over to another’s keeping.  They danced to the strains of Love is a Many Splendored Thing and honeymooned in Florida before embarking on their adventure as husband and wife.  I would not describe my parents’ marriage as a fairy tale romance, a love story for the ages, but they were forever affectionate with one another.  They laughed together, and told jokes and settled comfortably into one another as they raised two daughters.  They overcame their own conflicts, fought their own demons, navigated their own bumps and potholes.  Above all, in all aspects of my memory, there were together.   But though a daughter, I am only an outsider looking in and looking back.  Perhaps the grand passions, the declarations, the fights and tear-stained conversations took place behind the privacy of closed doors.  As it should be.

A few years shy of their 40th wedding anniversary, my father died.  I have had eight years to acknowledge my father’s death, have had my own husband and children to buffer the grief, but it is only recently that I have been able to appreciate how my mother has traversed her own bereavement.  The strength with which my mother has continued to hold her head high should not have surprised me, but it did.  It is far easier to hide behind the woe, easier to bury the anguish.  It is easier to hide away and cloak yourself in widow-hood, easier to coat yourself in a teflon suit of anger and be pissed off with the world.  What is difficult to do is to continue to live a life worth living.  And my mother has done that.  And though I don’t tell her nearly enough, I am immensely proud of her.

When my father died, my mother did not just lose her husband.  She also lost her future.  She lost the dream trips and retirement plans.  She lost the grandparent who would bounce my boys around and share in her joy.  She lost her partner and protector, her buffer and her shoulder.  It would be easy to live a diminished  half-life, to wander around in a haze of self-pity.  But she has not done that.  Though I do not share her faith, I can’t deny the impact it has had on the way she has learned to bear her grief.  She is lucky to have a tightly woven safety net of neighbors and friends who have been there every step of the way.  Friends who sat in hospital rooms, who slept on the sofa near the very end so she would not be alone.  Who helped with arrangements, kept her company, made sure she did not retreat into herself.  And I will forever be thankful to them.  But faith and friends aside, my mother had to find resilience within herself.   The will to withstand the ease of being bent and disfigured by fate and circumstance.  Perhaps it had always been there, hidden away at the bottom of a marriage, weighed down by motherhood and housewifery, by work and caring for aging parents.  But beneath the layers of every-day, below the surface, there was a powerhouse I wasn’t expecting.  My mother, like so many widows, was forced to rediscover herself upon my father’s death.  And what emerged was a woman I am proud to know, and even more proud to call mother.

Not long after my father was waked and mass-ed and said good-bye to for the final time, after the moments where you are unsure if you will breathe again, after the impossibility of trying to imagine a life without, my mother told my sister and me that she would like to date again someday.  I think now it was her way of protecting herself from the vast unknown that was stretching ahead.  A relatively young widow, she was only just 60 when my father passed away.  I don’t think there was a moment when she imagined a life without him, the possibility of decades ahead spent by herself.  Staring that down must have been terrifying.  I understand the need to think there will be something else along the way, something to hang your alone-ness on, otherwise it is unbearable.

But that was eight years ago.  My sister and I have given her our blessings many times over, given her our assurances that we would not think any less of her, we would be happy if she met someone.  But she has shown no interest.  For my mother the vow of ‘Til death do us part‘ seemed not just to include the death of my father, but hers as well.  Of course I worry about her, in the sense that any of us worry as our parents get older.  Because she is my only living parent, I nag her about looking after her health, harass her about eating the right food and not doing too much.  But I probably don’t tell her enough how proud I am of her.  How I applaud her dedication to continue the act of living.

Out of the ashes has risen a woman I admire.  One who has guided the rest of us, who has set an example by her refusal to break under grief, who has continued to move forward and not let the bitterness, the anger, the sadness win.

How lucky I am. 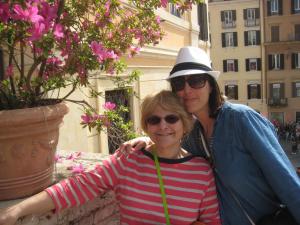 10 thoughts on “Til Death Do Us Part”

I Still Haven’t Found What I’m Looking For…

It’s On The Tip of My Tongue

I'm a mom. I'm political. Give me coffee or give me death.

Reviews, news, features and all things books for passionate readers

Helping you mature as a writer and author.

THIS IS US… a colorful, collaborative, collection of truth-tellers, soul-sharers, magic makers and game shakers. All that have a unique story to tell, angle to take and position they stand strongly behind.

What you need to know about roofing

a performative documentary project based on letters to the editor of Ms., 1972-1980

Predominately Books But Other Stuff Too

Seeking to read the pages of Earth's Book.