Remember the endless summers of childhood?  Back in the summer of ’69… or ’79 …or maybe at a stretch ’89?  Days chock-a-blocked with swimming and bike rides and kick-ball, those seemingly never-ending days flowing seamlessly into musky evenings spent swatting mosquitos or following a train of fireflies across the garden.  Cannonballs and rocket pops from the ice-cream man, sitting on the curb with a cone of orange sherbet patiently scooping down to the gum ball at the bottom.  Camp was for rich kids or city teens.  For almost everyone I knew growing up, it was 10 weeks of schedule-less, lazy morning, late night, sticky-chinned, skinned-knee freedom.

I long for my children to have summers like those long-gone days.  Instead I seem to spend long periods of time trying very, very hard not to commit homicide.

Apples and oranges, I know.  I grew up in small town, U.S.A. while my kids are growing up in a foreign city.  I grew up in a house with a yard, they are maturing in an apartment block.  There is the annual summer ex-pat exodus to contend with, so decoding who is available to help dilute the time involves spread sheets and precision.  Some of it is parenting trends.  When I was growing up, we basically got our butts kicked out of the house and didn’t come back until the porch light blinked.

I am beginning to regret the time and effort I’ve put into my kids, because it seems to mean that they require my undivided, unadulterated, unflinching attention.  Every second of every day.  I’m sure the same was true for my own mother when we were very young.  But she had neighbors to sit with.  And cigarettes to smoke.  They kept half an eye on us in the pool, making sure there were not young bodies floating on the surface, but otherwise pretty much left us alone.  God, how I long to smoke and sit making sure there no young bodies floating on the surface of the pool. 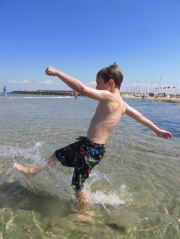 Every year I take my own boys back to the neighborhood I grew up in, trying valiantly to recreate those magical days of no more pencils, no more books, no more teacher’s dirty looks.  And for a few weeks they swim and slam the screen door on their way out and drip popsicle juice on the kitchen floor.  And I think, yes, this is what summer should be.  But the rest of the time they harass me to use the iPad or play Wii.  Or, as they did increasingly this summer, fight with each other.  Forget the summer of love, I would settle for the summer of tolerance.

Life with my boys this summer has been a trial.  The older one is growing up.  I know he’s stretching those mighty wings, the ones we’ve worked so hard and tirelessly to groom and maintain.  I know he’s doing what he’s supposed to be doing.  But by God, it’s annoying.  Everything, and I mean everything, is a courtroom drama.  While I appreciate that the progressive nature of his current education is teaching him to think outside the box and find alternative solutions, I really don’t need or want him to argue that the way I get to the supermarket is not the best way.  Or that the way I’m doing (fill in the blank) is wrong.  Or the fact that he re-counts my pawn pieces during a game of Sorry because, apparently, counting to 12 is beyond my capability.  He asks a question and I answer and he doubts.  He argues.  He negates.  He litigates.  It’s like living with a mini Alan Dershowitz.

Together, they’ve been oil and water.  Or more accurately, like baking soda and vinegar–mix them together and some small explosion occurs.  They have been up my ass, in my hair, circling me, stalking me, reading over my shoulder, haranguing me, and generally driving me to drink.   At a time when I’ve been trying not to drink. 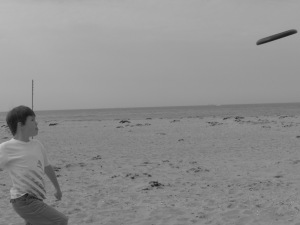 Every now and again we’ve had a beautiful beach day with friends, or an afternoon of playing frisbee at the park.  We’ve had a few stolen hours of summer harmony in between the fighting and the bickering.  We’ve cycled down to get ice-cream and for a few sticky moments, I forget about having to unwrap their chocolate-chip covered fingers from around each other’s throats.  But I feel like those shimmery, summer moments have been few and far between this year.

Perhaps I’m getting old, putting a glossy veneer on my own summer memories.  I’m sure my own mother remembers those long summer days a lot differently than I do.  I’m sure she counted down the days to the start of school as desperately as I have been.  And I’d like to think my own boys will remember the beach days and the frisbee and the double-scoop ice-cream cones rather than Mom screaming at them to find something QUIET to do.

School’s out for summer may be the refrain of millions of school age children come June.  But I am inclined to lean toward that brilliant Staples commercial, the one you can’t truly comprehend unless you have kids of your own.  Because next week, when the school starts up again, I too will be singing along.