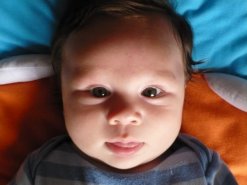 Today my second born, my baby boy, my fidgety ninja tornado of a son, turns six. Our whirlwind philosopher, our witty dervish, our baby who wasn’t supposed to be.

What was scheduled to be our final cycle of fertility treatment, the last hurrah, our last-ditch effort to expand our family, had been canceled for medical reasons. We called time on the whole thing, made our peace, and counted our blessings. We looked on the bright side and made big plans. The fickle universe had other ideas. The running family joke is that son number one is my fault, but son number two is all my husband’s doing; the spontaneous, surprise result of a bit of afternoon delight, skyrockets in flight, and all. We should have known a baby conceived on July 4th would be full of vim and vigor, full of spark and sizzle and pop. While I was pregnant, swollen with this life that would soon become irrevocably entwined with mine, I called him the Shark. Even in utero, he was always on the go, never-resting, always moving. My belly would rock and roll with his movements, elbows and knees shifting and kicking. Even then he was a ninja. At six, he still spins through life,.

My not so still life with boy.

A few weeks ago he lost his first tooth. For me, that little moment of maturity was far more symbolic than other milestones he has met along the way. When he lost that pearly little Chiclet, he shed more than just a baby tooth, he shed the last layer of  babyhood. Soon his marshmallow cheeks will thin out, his jaw will start to square. Soon he will surprise me when I catch sight of him from a certain angle, because I will be able to see the shadows of the young man who is still a long way off, but not as far as it used to be.

It’s not easy being the second born. It’s not easy being the baby of the family. He is in a forever competition with his older brother, a battle to the death–or at least the adult. He is often angry at me, at his father, at the world that he was not born first. He is stubborn, oh is he stubborn, but he astounds me with his philosophy, the way he thinks, the way he sees the world. He is so different from his brother, so different from me, though he shares with his father a dislike of mornings and a sense of time smack dab in the middle of the man time continuum. Forget snails and pails and puppy dog tails. He is drama and mischief and Kant. Already he has flummoxed me with his reasoning, his unique ViewMaster take on life. When your five year-old snuggles up to you in bed, looks at you with his milk chocolate eyes and says: “today will be the only today there ever is. There will never be another today”, it can be humbling. When I say something like “People is glass houses shouldn’t” and his instant response, without missing a beat is “walk around naked,” it can be thought provoking. It won’t be long before he is outwitting, outsmarting and outplaying me, his father, and his brother. There is no doubt who will be the last one standing, the sole survivor. I only hope I have a few more years to train.

He has always marched to the beat of his own drum. I would say at times he has marched to the beat of a different instrument entirely, perhaps to an imaginary symphony in his head. This is the boy who instead of having a blanket or a favorite stuffed toy insisted upon sleeping with a variety of household objects, including a bottle of purple shower gel, a discarded electric toothbrush and an empty mouthwash bottle. For months he carried a frying pan with him wherever he went. He has always been, from day one, his own man.

Despite the depth of his personality, despite being one of the most capable five-now-six year olds I have ever met, he suffers from the insecurity of the second child. It’s no secret that second children get shafted in the attention game. Where they benefit is being born into an established family, a unit that has already had a chance to find its feet on shaky ground. Second children benefit from the trial and error parenting that defines child number one, not just in the beginning, but always. With the second child, there is less chasing around with a fork full of food and more enjoying them for who and what they are.

Not that long ago, I woke up in my little one’s bed. It had been one of those nights of musical mattresses, someone was ill, someone had a nightmare, someone had night sweats. Reed, my Mexican jumping bean boy, doesn’t stay still in sleep anymore than he does in the day; in fact, we call him ‘the Gas’ because he expands to fill whatever space he is in. On those rare occasions when I allow him into bed with us, it’s not uncommon for me to stumble my way to his room and finish out the night in the bottom bunk. As I woke that morning, it hit me that life is very different when viewed from his perch on the family tree, from not only his perspective as a child, but also the second child. It’s a different view there from the bottom bunk.

It is a refreshing way of looking at life. Innocence and imagination and a carpe diem-ness that we are lucky to grasp merely an echo of as an adult. It is that view which allows him the freedom to pretend that piece of old fishing line is really a spider thread, that a piece of broken beer bottle is an amber gem, that the digging club he founded at school may have found an ancient city at the excavation site under the sand pit.

Six is still young, but on the way to the place when the wonder will start to yield to logic and reason. I want him to hang on to that sense of wonder for a while longer, hang on to the excitement of being a kid. Last night as I tucked him and said, “You are going to sleep five and you’ll wake up six!” He looked up at me with those milk chocolate eyes and said, “It’s like magic.”

I’m not sure who benefits from the magic most, him or us.

Dear jumping bean, dear ninja master, dear my ants in the pants boy.  Dear Reed. Don’t grow up too fast, our family needs your wit, your input, your perspective. You balance us. You challenge us every day to see the world from your eyes, from the eyes of the second child. From your view there on the bottom bunk.