The other day a friend stopped by with her two daughters in tow, all bright smiles and freckle-faced freshness. Her older girl, bordering on middle school, smiled and gave me a sticker which, I was told, she’d been keeping for me because she thought I’d like it.

Look, I scream and use a lot of four letter words. I rage and sometimes but not always fantasize about pulling lightening crackling down from the sky. Some days I put on my pointy witch hat and sweep away the bullshit. But when it comes to kids, I’m kind of a marshmallow, so of course I was touched.

I put it on my laptop, which is home to a selection of sticky slogans, and the more I thought about it, the sappier I got–and not just because I’m probably going to get one of those freak, out-of-nowhere periods that seem to happen when you’re in your late 40s.

I got a little misty because it’s working.

What I do, the way I live my life, the attention I pay to detail, what I speak about, how I talk to girls and boys, the screaming, the shouting, the listening, all of it. It’s working. Because here was this bordering on middle-school girl, half-way down the path to young woman, a girl who is going to, probably sooner rather than later, face the inevitable: comments about her body, catcalls from men who should know and act better, someone, somewhere dropping a comment about her being just a girl–or crying like one, throwing like one, acting like one–as if any of those are inherently bad. She is a girl, which means she’ll pick up on clues from folks who think she’s not worth as much as a boy. She’ll overhear a conversation between boys she knows talking smack about another girl’s body. She’ll overhear a conversation between girls she knows doing the same.

And along comes a sticker, and I thought that seed is planted. It’s buried now, deep down. And it will take root and it will blossom.

I nearly whooped with joy.

My own boys know what I’m like and what’s important to me. But they’re mine. I’m the chief baker and molder of their environment cookie dough. I have been since they were cooing and ga-ga-ing in their Baby Einstein Exersaucer and every day since. But other people’s kids? It’s a pretty great feeling to know that a tweenage girl could see an image, an image evoking female strength and independence, and think of me.

Sweet, right? And I don’t mean in the sugar and spice sense there, I mean in the long drawn out sweeeeeetttt sense.

I think–and hope!– that through these pages, through my actions, my love and respect for my sons is evident. But there are times when I live vicariously through my friends’ daughters, not so much to fill a gap in my heart, but to get a pulse on today’s girls and what they are like. Once I had a conversation with two friends about the things I miss out on being the mother of  only sons.

“I’ll never get to share that first period moment!” I lamented.

They thought I was crazy, but I kind of meant it. Let’s face it, the first nocturnal emission just doesn’t seem to have the same rite of passage feel about it. And to be honest, it’s not something they’ll likely tell me, although if they do, perhaps we’ll share a ritual passing over of the tissue box, who knows.

So my friends message me when a daughter does something they think I will like or find amusing or just kick-ass.

C called out her tennis coach when the medal she got only featured a boy;
R does a fist pump and says “Smash the Patriarchy” when I see her;
E regularly tells boys they aren’t allowed to touch her without her permission;
Another R writes essays and challenges gender stereotypes in her high school hallways; and
S saw a sticker of Supergirl rescuing Superman and thought of me. 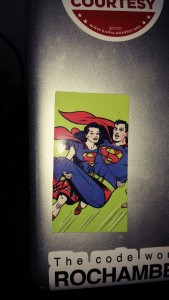 And I feel, just for a moment, just for a split second, like I got to play some tiny part in that, like I get to change the world just a little bit.

One super girl at a time.