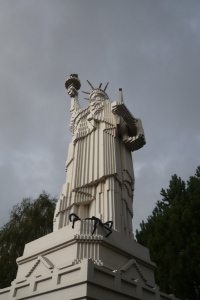 Far be it for me to pretend expertise on the ex-pat front.  I’ve only lived out of the US for 4.5 years, only 2 countries under my belt.  Despite cultural differences, both have been fairly easy places to blend in as ex-pats.  I have met people on this journey that have spent their entire lives moving from post to post, daughters and sons of diplomats, foreign service workers, military brats.  They can speak far more accurately and astutely on the subject than me.  But 5 years ain’t nothing and I’ve noticed some stuff.  When you are an American abroad, especially during an election year, people like to talk to you.  Pick your brain, tease out the good stuff, lay some stereotypes to rest.  It’s like an international version of Mythbusters.  So following is my personal best of list.

Top 10 things non-Americans assume about those of us that hail from the good ole’ U S of A:

1.  We all own a gun, several guns, perhaps even a shoulder-held surface to air missile launcher.

Though I do in fact own cowboy boots, for me, and most people I have met, that’s as far as the Annie Oakley comparison goes.

“You are very…er…American” roughly translates as “You and your children are exceedingly and extremely LOUD.”   NOT MUCH TO SAY TO THAT ONE, IS THERE?

3.  We are obsessed with dentistry.

Americans love big, white, Julia Roberts smiles.  We spend vast sums of money on teeth whitening, veneers and spend more time at the dentist than we do with our grandparents.

4.  We like jersey clothing a bit too much.  Juicy or not.

This is a nice way of saying that a lot of non-Americans think that Americans spend far too much time in sweat pants and sneakers.

With a presidential election coming up, the rest of the world is tuned in, turned on, and waiting on the edge of their seats to see which way the coin toss ends up this time.  And a lot of them think that it is our sole goal in life to re-create the British Empire, but with American English as opposed to the Queen’s.

6.  We all drive Ford Explorers and Hum-vees

We went Danish when we got here, and don’t even have a car, but rely on public transportation and our bicycles.  Even when we lived in New York, we squeezed two car seats and a 6 foot 5 inch husband into a VW Golf.

Food, consumer products, incomes, space.  We want our cake and want to eat it too.  Maybe even three cakes.

8.  We sweat the small stuff

9.  We are young and impetuous

From their perch of history, a lot of the world merely looks at the US as a parent might look upon a tantrum-throwing toddler.  These are places that have the battle scars of revolutions, civil wars, social uprisings, and coups.  The United States sometimes comes off to them like a know-it-all child.  And like a weary parent, sometimes they  just choose to sit back and wait to say “I told you so”.

A nation where you can be all you can be, pull yourself up by the boot-straps, bring home the bacon and fry it up in the pan, but without a national health system.  The irony is not lost on others and it causes no end of amusement.  Why can’t we get our shit together?  The resources, the money, the intellect, it’s all there.  So why aren’t we using it?

So as the rest of the world tunes in to the reality show that is the upcoming Presidential election, only time will tell what happens to our reputation overseas.  No matter who is elected, the outcome affects more than just Americans.  For some it doesn’t matter what ‘others’ think.  But there really are so many great things about the United States.  As an unofficial ambassador for my home country, it would be nice to be noted for the sublime and not the ridiculous.

post script:  most of this post is meant to be tongue in cheek, but I welcome an open dialogue.  As long as it agrees with my views.  (Kidding!  I’m kidding!!)